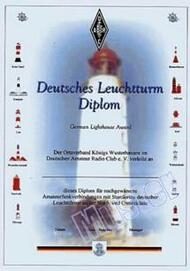 The applicant must have been made all contacts from the same DXCC- country. A change of location (QTH) is approved (/am, /p, /mm, /m). The award is not limited to any band or mode.

Stations activating a LH must be operating from the lighthouse building itself, from an adjacent building belonging to the LH , the dock of the LH or within a maximum distance of 500 metres land based to the Lighthouse. Reports about activities from lighthouses to the Award Committee are welcome and should include QTH, dates of activation and name of the lighthouse. Lighthouse stations can receive the award for working at least 100 different stations

If requested and proofed the award can be issued for a certain mode exclusively. The application for the award should be sent with a confirmed list of QSL cards (GCR Liste) and including the fee of US $ 8.- or EURO (€) 7.- to the following address:

Information about the award can be obtained sending a SASE letter to the Award Manager mentioned above. The award is 210 × 297 mm and printed on 250g/qm paper showing a coloured Lighthouse flanked by 6 german lighthouses on each side.